Why are Traditional Lederhosen Essential for Oktoberfest? 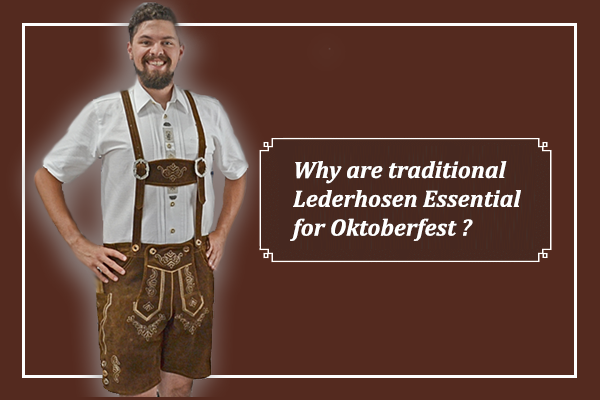 Why are Traditional Lederhosen Essential for Oktoberfest?

When you imagine Oktoberfest, the first picture that comes to mind has the entire city of Munich covered with German lederhosen and dirndls. These are the traditional Bavarian costumes that locals and tourists wear to celebrate German folk culture during the largest folk fest in Germany! You may sing, dance, and make merry, but without these traditional costumes (together known as “trachten”) you’re bound to feel left feeling out of place.

While the citizens of Munich are used to wearing their Bavarian garb as part of their daily lives, today German Lederhosen, dirndls, and Oktoberfest bundhosen have become synonymous with Oktoberfest fashion even for international tourists who attend the festival! Authentic German Lederhosen provides quality in its material and design. As far as Oktoberfest is concerned, they symbolize the entire historical culture of folk Germany.

Owing to geographical, historical, and cultural overlaps, German lederhosen has been closely associated with Oktoberfest. Created in the 18th century by European peasants, authentic leather lederhosen were designed to provide mobility and comfort to men during their daily life activities.

By the turn of the century, wearing lederhosen (and other tracht) had become common in the Alpine terrain of Bavaria. Coincidentally, at the end of the first decade of the 18th century, the first Oktoberfest funfair was held to celebrate the marriage of King Ludwig I and Princess Therese. Not surprisingly, wearing German lederhosen became customary for every man who attended the festival while the dirndl became customary for women. This tradition of fashion is followed even today, with people enjoying Oktoberfest and looking dashing in their finest German lederhosen.

A Tribute to Bavarian Customs

A Bavarian celebration through and through, Oktoberfest today demands authentic leather lederhosen. If you have any doubts about German lederhosen being emblematic of Bavarian culture, just check out some of the photos from any previous Oktoberfest. This traditional costume evolved into becoming the epitome of Bavarian folk culture: with a front drop-flap, lederhosen became a popular Bavarian symbol. Even the French deemed lederhosen as “a la bavaroise”: Bavarian style. Today, Oktoberfest brims with locals and foreign tourists donning their authentic lederhosen and sharing the Bavarian cultural customs. Indeed, the locals of Munich appreciate such a celebration of their folk culture at Oktoberfest, as their joy is shared by everyone present.

As you know, innumerable tourists head to Munich to participate in Oktoberfest every year. For all newbies who are interested, the best tip: never underestimate the importance that the Munich locals give to authentic leather lederhosen. Wearing genuine and authentic German lederhosen shows your reverence towards the German folk traditions.

In summary, lederhosen is considered essential to Oktoberfest, much like its counterpart, the traditional dirndl. While there are many online and offline outlets that offer authentic German lederhosen, Ernst Lich offers great quality with great prices. Choose wisely, and go enjoy the festival!